Vietnam has a rich cultural and historical history that attracts visitors from around the globe. In addition, Vietnam offers a spectacular assortment of natural landmarks and lush getaways in the tropical jungles of the region. The following are the 5 top attractions and destinations that should not be missed on your Vietnam vacation: 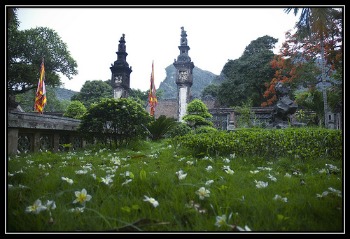 About two hours away from Hanoi, guests can walk through Hoa Lu, the ancient Dai Co Viet (10th century Vietnam) capital city. Hoa Lu was the political centre of Dai Co Viet, and was flanked on all sides by rocky limestone hills which provided a natural defense for the capital. Though much of the original structures have long since disappeared, there are still more than 40 monuments to see including temples, lakes and caves.

At the extreme north of Vietnam sits the Detain – Ban Gioc Falls. The falls actually lay on the border between Vietnam and China and mark one of the major crossing points of the Chinese army during the Sino-Vietnamese War. The falls are the largest (but not highest) in the country as water drops thirty meters onto the rocks below. During the rainy seasons from May to September, a huge cloud of mist that can sometimes be seen from miles away.

Just behind the limestone mountains in Ninh Binh Province sits the biggest pagoda in South East Asia, the Bai Dinh Pagoda. Bai Dinh sits over a 100 acre area and features a multitude of different building and temples. Bai Dinh also holds several records for statues, including the most Arhat statues in Southeast Asia (500 of them) and the largest copper Buddha statue which weighs in at 100 tons. For its size and uniqueness, Bai Dinh is one of the most popular sights for Buddhist pilgrims throughout Vietnam.

4) The Old Quarter of Hanoi

36 streets were all that was of Hanoi at the turn of the 20th century. Today Hanoi is now the 2nd largest city in Vietnam with a population of 2.6 million people. The 36 streets today make up an area known as the Old Quarter of Hanoi. Travelers can not only still visit the small merchants that remain in the Old Quarter, but also take in other sights such as the Temple of Literature (the oldest university in Vietnam), or any of the modern clubs and restaurants that line the streets of the Old Quarter.

Conflict has molded the identity of Vietnam during the last century. Visitors can see and reflect on those conflicts at the War Remnants Museum in Ho Chi Minh City. Focusing mainly on the American/Vietnam war, the museum features a gallery depicting the effects of chemical agents used in the war like Agent Orange. Guests can also see exhibits of weapons and munitions as well as captured American war machines such as a Huey helicopter, Patton tank and F-5 fighter jet.