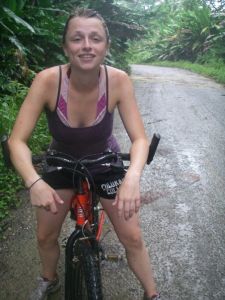 On rainy day in Bocas del Toro, my travel companion Lindsey and I played cards in our hostel (Mondu Taitu) and brainstormed activities that could be equally fun in sun as in the rain. After talking to David, one of the friendly American owners of Mondu Taitu, we decided a bike ride through the island to Playa del Drago on the opposite side was just the thing to do. David told us the bike ride was just as fun, if not more, in the rain and the drizzle would keep us from getting too hot. The journey was 15 km each way and hilly, but we were up for the challenge.

We found bikes to rent in town for US$5 each, though I can’t say these bikes were in top condition. Because of the humidity, ocean air and general lack of upkeep, most bike rental places have rather rusty and ill-working bikes. The brakes worked (mostly at least) and the tires were inflated though, so Linds and I set out on our journey.

The ride took longer than expected, as one of our chains seemed to fall off every 5 minutes, but the ride through the center of the island was amazing. The middle of the island was mostly dense jungle dotted with a few homes with chickens in the front yard. Panamanians in rubber boots walked the road returning from work. The road was paved, but littered with potholes and mounds of dirt, so the going wasn’t always the easiest, but the trip was definitely fun and worthwhile. 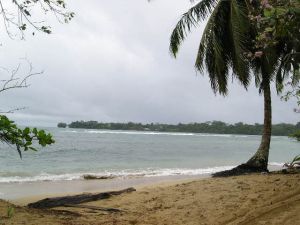 Playa del Drago, on the opposite side of the island was quiet and calm, a stark contrast to the busy and touristy city of Bocas. There was a small restaurant here where you could have a snack and a bay with a small scenic beach. There was some coral in the bay and fish to look at with a snorkel as well. We returned that night to the hostel covered in mud and soaking wet, but happy with our biking adventure that rainy afternoon.