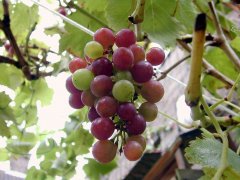 The Dingac wine region near Dubrovnik is one of the smallest and most unique producers of red wines in the Mediterranean latitudes. It also produces some of the best wine in Europe.

The key to the Dingac wine, like all wine, is the crop of grapes. The key grapes in this case are known as the Plavac Mali grapes, which grow on the south side of a restricted peninsula in southern Dalmatia known as the Peljesac peninsula. The tiny 2 km patch that house the grapes is called the Dingac region.

The grapes grow in such a specific location, that families tending the grapes could not transplant them to the other side of a short hill and instead spent their time walking up and down the mountains each day to tend the grapes or riding donkeys with their tools.

Because of this, in the 1970’s the wine growing families pooled their money and constructed a tunnel through the mountain running about a half a kilometer in length so that they could go to work on their crop of grapes without having to go up and over the entire hill. Only workers with the Dingac grapes tend their plants after traversing through a tunnel each day to get to the plants and Dingac has enjoyed some extra notoriety because of this.

Dingac wines are a part of Croatian culture. Most oenophiles and food critics recognize Dingac and could tell you where it came from. Perhaps because of that, Dingac is protected under the international Geneva Convention, perhaps the only wine protected under a treaty in Europe. The wine itself is noted for its dark red color and distinguished aroma. The wine is credited with a full and harmonious taste, that errs toward being slightly sweet as it goes down.

Dingac wine is exclusively red wine and the Plavac Mali grapes are so sensitive that tiny changes like the angle of the sun and the position of the hill change the way that the grapes taste. These positions and angles have been refined in the Dingac region for the last 470 years at least, but the tradition of winemaking in the area goes back even farther than that, to the very first people to inhabit the peninsula.