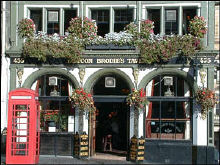 Leave it to a pub to glorify an 18th century burglar in such a way as to turn the pub into a tourist attraction and the burglar into a celebrity.

Deacon Brodie’s Tavern on Edinburgh’s Royal Mile gets its name from a former resident of the city, a cabinet maker and city councillor who rose to the rank of deacon of his guild. Deacon William Brodie was a respected member of society, rubbing elbows with Edinburgh’s upper crust as he also fitted their cabinets with locks.

This level of access apparently gave him the grand idea that since he was installing and repairing the lock mechanisms he could easily make copies of the keys while he was at it. Brodie then embarked on a second life, a nighttime life, of a burglar. Certainly, part of the allure of the burglary was the excitement of potentially being caught, but Brodie also had developed something of a gambling habit – and the goods he stole helped to fund his addiction.

Brodie’s double life is said to have inspired the famous tale of “Dr. Jekyll and Mr. Hyde” but even if that’s a stretch Brodie’s real-life adventures are interesting enough on their own. Deacon Brodie’s Tavern showcases both sides of Brodie’s existence, one on either side of the pub’s sign hanging over the front door. You’ll see the “By Day” Brodie on one side, and the “By Night” Brodie on the other – complete with bag of stolen loot.

This tavern is more than just a tourist attraction, however, it’s also a good place to grab a bite to eat. It’s often crowded, but it has two floors so is more spacious than it first seems. The lower floor is for lighter meals – soup, sandwiches, etc. – and the upper floor is the more traditional restaurant where you can get more full meals. Children are allowed in the restaurant on the upper floor, but not in the pub on the ground floor. Because it’s located right on the Royal Mile, it’s easy to stop in for a light meal or a quick pint en route from one tourist stop to another.

The real Deacon Brodie’s story doesn’t end quite as happily as your visit to his tavern will. He and his accomplice were eventually caught and hanged in 1788. So before you go, raise a glass to Brodie – either side of his personality will do.