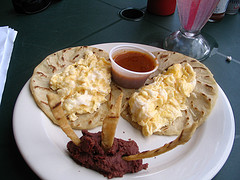 Honduras doesn’t really have its own unique dish, but rather its own takes on the popular dishes of surrounding countries. The most popular would have to be Plato tipico, which is essentially the same thing as a light Casado found in places like Costa Rica. The Plato Tipico consists of rice, beef, fried beans, and fried bananas. Some places include other sides like “salad” or some variety of chimol.

The one original Honduran food you will find is called Baleadas. These are a thick flour tortilla filled with a variety of items. Simple Baleadas come with refried beans, cheese, and a type of cream similar to sour cream. A special Baleadas usually come with either eggs, avocado, or meat.