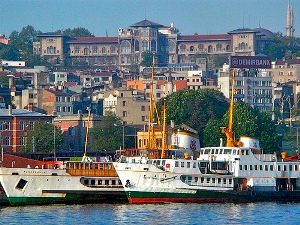 Turkey is bordered by three seas –Black Sea, Aegean Sea and Mediterranean Sea -, which means water transport has always played an important role in the country’s transport system. If you are in a hurry the quickest way is to fly to Turkey but if you like to travel leisurely, you should definitely consider taking a ferry.

Ferries provide transport both for passenger and vehicles. They represent one of the best ways to get from Istanbul to the Aegean Sea resorts.

There are also ferries which link Turkey to Cyprus, Syria, Libya, Russia and Ukraine.

Some of the domestic ferry connections include: