From Croatia to Rome 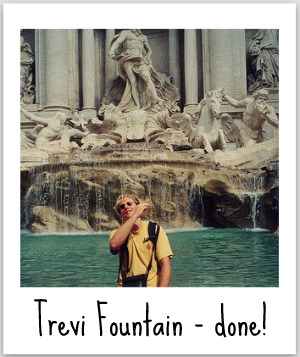 When you’re making a tour of Mediterranean Europe, it makes sense to include both Croatia and Italy on your list. There are some similarities between the countries, especially when you’re comparing the Croatian coastline with Italy’s Adriatic coast, and if you’re already in Croatia then it’s absolutely worth it to get over to Italy for a little while. Croatia remains cheaper overall as a tourist destination than Italy, so if you’re traveling on a strict budget it’s a good idea to spend more time in Croatia – but there’s only one Rome in the world, right?

There are many choices when it comes to getting to Italy from Croatia (and vice versa), and if you’re on the Croatian coast you can definitely look into the overnight ferries. They’re economical if you’re already in the cities from which they depart, and if you have the time to spare. Flying between the countries used to be more cost-prohibitive, but with the number of discount airlines that have cropped up in recent years it can be a really inexpensive trip.

There are more options on discount airlines on flights to Milan, but you can often find cheap airfare to Rome on airlines that aren’t even considered “budget carriers.” Many will offer one-way fares and last-minute specials, so it’s always worth checking. This is especially true if you’re further inland in Croatia and closer to an airport like the one in Zagreb than a port city.

If you time your visit right, you can save money on a visit to Rome by avoiding the more expensive hotels in Rome and opting for hostels instead. Even outside the high season, you’ll likely pay more for a Rome hostel then you paid in Croatia, but you’ll still get a good deal on a bed and be able to save money for more fun things like food and attractions.

And speaking of attractions, you probably don’t need to be told about all the things to do in Rome – it’s home to so many famous sights that you probably already know what you want to see there. But besides the Colosseum, Forum, and Vatican City there are all kinds of churches, museums, and historic attractions that are less well-known but equally interesting. Many of the lesser-known sights come with cheaper entry fees and shorter lines, too, so you won’t waste your vacation standing in line and you won’t spend all your travel budget on admission prices.