Getting Around in Porto 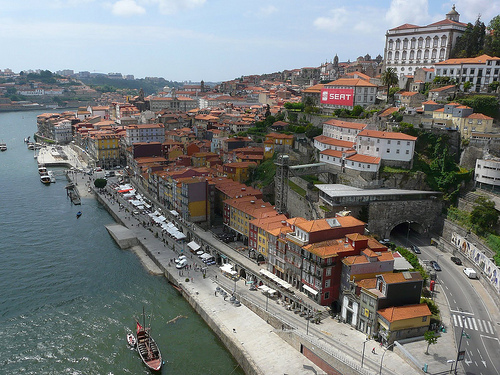 While most people think of Porto (or Oporto) as straddling the Douro river, that’s actually incorrect. Porto is located on the north side of the Douro while the south side, where the port houses are located, is actually called Vila Nova de Gaia. The two cities are connected by a bridge which carries cars, a tram and pedestrians over the river.

Visitors to Porto are generally better off without a car; the streets can be confusing (and some require special permits to drive on), parking is hard to come by, and public transport is cheap and easy to use. Here’s what you need to know about getting around in Porto.

From the airport or train station

Porto Airport has a station on the Metro do Porto light-rail/tram system. Depending on where in Porto or Gaia you are staying, it will take about 20-30 minutes to arrive and you may need to change train lines or take a cab from the city center (especially if you are staying on the Gaia side) once you arrive. The tram from the airports costs just a few euros (the price will vary depending on your destination) and there are attendants at the airport to help you plan your route and use the automated machines. Be aware that the machines only take change, no bills.

The  main train station – Porto Campanhã  –  is on the east side of the city, about 2 kilometers from the center. Upon arrival, you can take  a local Urbanos train 5 minutes to the city center station of São Bento or take a cab to your final destination.

The public transportation system in Porto is excellent and made up on trams, buses and the Metro do Porto , a network of six tram or light-rail lines that run every 10 – 20 minutes from 6am until after midnight. Ticketing on most buses, trams and rail is integrated under the ANDANTE system using zones to set the fares.  The trams – four-wheeled wooden trams from the 1920’s – run about every 30 minutes on three different lines. Line 1 is the most popular with tourists, taking them from Porto to the leafy and upscale suburb of Foz. There’s also a funicular that runs from the Ribeira (riverfront) up the hill towards the city center.

Cabs are plentiful and cheap (compared to other European countries) in Porto. It’s safe to hail one on the street, just make sure the meter is on or that you negotiate a fare beforehand. Most taxi drives speak enough English to take direction, but if you are headed to a less touristy destination, it’s wise to have the address written out for the driver. It’s common to tip a taxi driver 10% of the fare.

Most of Porto is easily accessed on foot as many of the main attractions are located in a small area. However, Porto is quite hilly and walking up from the riverfront (on either side) can be tiring. Especially if you are headed from the riverfront to the city center of Porto, consider taking a cab or riding the Funicular to save your legs.