Getting from Lima to Arequipa 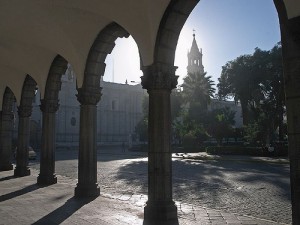 Lima is the capital of Peru and the most important domestic travel hub. If you fly from abroad you’ll most likely land here and then either catch a connecting flight or travel by land to other Peruvian destinations.

Arequipa is located in the Southern Costal region of Peru and is surrounded by three impressive volcanoes. It is Peru’s second most important city – after the capital – and the second most popular among tourists – after Cusco. It is where tourists make their base before setting off to explore El Misti, one of the volcanoes surrounding the city and the easiest to climb year round. The city is a mix of Peruvian and Spanish colonial architecture.

Although the bus ride is long (16-18 h), that’s the cheapest option for getting between Lima and Arequipa. If you don’t have that much time on your hands, you can fly (for about twice the bus fare).

The capital of Lima is served by Jorge Chavez International Airport (LIM) , located 11 km from the historic city center. It is a major domestic hub and also the most important international gateway into the country. The airport is hub for the following airlines: LAN Peru, TACA Peru, Peruvian Airlines, Star Peru and LC Busre.

Arequipa is served by Rodríguez Ballón airport (AQP) , which is one of the most important entry points in Southern Peru, along with Cusco’s airport. It’s not hub for any airline but it receives both domestic flights and some international flights (South America).

Flights between Lima and Arequipa are operated by LAN Peru, Peruvian Airlines, Star Peru and TACA Peru. The flight time is 1h 25 min. Regardless of when you fly in 2012, expect to pay from US$111 one way on TACA Intl Air.

Although Peruvian Airlines is not listed by all flight booking engines (such as Kayak), for this route they offer more expensive flights than the cheapest direct option mentioned above (US$127 one way on Peruvian Airlines).

Read more about:
>> Flights to Peru
>>Flights to Lima

Buses from Lima to Arequipa

Unlike other large Peruvian cities, Lima doesn’t have a central bus terminal. Most buses arrive in La Victoria (which is not the nicest neighborhood) but others stop on the outskirts of La Victoria.

Driving from Lima to Arequipa

Although the drive is very long , if you choose the Panamericana Sur route (1028 km) you will be blessed with superb views along the way as most of the road is right by the coast. But it’s a 13 h drive so make sure plan stops along the way. It’s even better if there is more than one driver willing to tackle this journey. Rent a car in Lima but plan several stops along the way.