Getting from Zagred to Dubrovnik 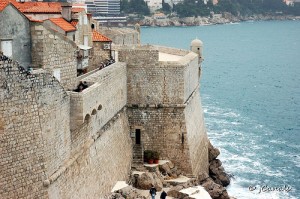 Zagreb is the capital of Croatia , famous for its old city and cobble stones reminding tourists of Prague, Vienna or Budapest. It is also where you’ll most likely arrive if you come from other parts of the world (via a major European hub) or by train from other European cities.

Dubrovnik is located on the Adriatic Sea coast and is one of the most well known tourist resorts in Croatia and Europe. Known as the “Pearl of the Adriatic” , the city has been listed as a UNESCO site since 1979.

There is not train connection between Zagreb and Dubrovnik but bus fares start at about €27* per person one way. Flights take significantly less (just an hour) and start at €41 per person, one way. If you like scenic drives, then part of this route- from Split to Dubrovnik – will make you fall in love with Croatia.

Zagreb International Airport (ZAG) is located 17 km from the city center, to which is connected by buses. It is the most important airport in Croatia and a hub for Croatia Airlines. It handles flights within Europe, as well as domestic flights.

Dubrovnik airport (DBV) is located about 20 km from the city center and is the third largest airport in Croatia. Dubrovnik Airlines is based here. Most of the flights it serves are seasonal, but there are domestic flights and flights from some European capitals which operate year-round.

Flights between Zagreb and Dubrovnik are operated only by Croatia Airlines. The flight time is 1h 5 min. Regardless of when you fly in 2012, expect to pay from €41 per person one way for a flight between the two cities.

Buses from Zagreb to Dubrovnik

There are 8 buses per day between Zagreb and Dubrovnik , including several night buses. The total journey time is about 11 h. It’s not possible to book the tickets online. You can check the timetable here . Fares start at 205 Croatian kune (about €27) per person, one way and depend on the bus company you choose.

Driving from Zagreb to Dubrovnik

You can rent a car in Zagreb and drive the 627 km to Dubrovnik on A1/E71. You should be able to cover the distance in about 7 ½ h but plan some stops along the way. This route also includes a ferry crossing (Trpanj – Ploce).

The route from Split to Dubrovnik is a beautiful scenic journey through various travel destinations and small villages.

Note: *at the time the article was written