Getting from Hanoi to Ho Chi Minh City (and return) 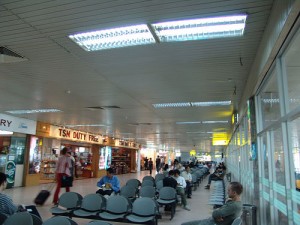 Ho Chi Minh City – commonly known as Saigon – is the largest city in Vietnam. It used to be the capital of South Vietnam. It is filled with museums and religious sites. It is also popular for its markets. Many travelers choose to visit both Hanoi and Saigon, making traveling between the two cities a very popular route.

Traveling by train and flying cost about the same, but if you choose to fly you’ll get between Ho Chi Minh City and Hanoi in little over 2hours. Trains take 30-35 hours and it’s a good choice if you want to see the countryside while you travel.

Flights between the two cities are run by Air Mekong, Jetstart Pacific Airways and Vietnam Airlines. Single adult fares start at US$87 on Jetstar, while return fares start at US$155 (on the same airline). The flight time is 2h 10 min.

The North – South ‘Reunification’ Main Line connects the two cities, Ho Chi Minh City and Hanoi. During the entire year there are 5 trains, while over the Tet holiday more trains are added. The travel time between the two cities is about 30 -35 hours.

There are buses connecting the two cities. Instead of seats, they have beds inside. And there are also toilets. The total travel time is about 30 hours and the single adult fare is US$43-50. Buses are run by Hoang Long Company (which doesn’t have a website). In Hanoi , they depart from Luong Vien bus station.