Getting from Los Angeles to Phoenix 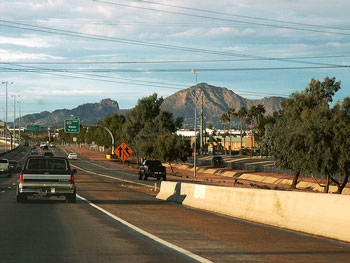 Especially as the December holidays approach, more and more people start thinking about spending a bit of time in Phoenix, Arizona. Depending on where you are from it could seem like paradise there during the winter months, or like a waste of time. Plenty of people from Los Angeles make the trip each winter, and fortunately there are several decent options available for getting there. Let’s go over them below, shall we?

It’s actually quite a nice drive the first few times you take it, and the road is about as straight as can be, so you’ll get there fast. But still, there are usually great deals on flights to Phoenix so that’s the way to go for most people. You can often rent a car there cheaply as well, and save the wear and tear on your own wreck. Buses are cheap, but take a long time, and there is a way to get there on the train, sort of.

Flights between Los Angeles and Phoenix

Unless you love driving, this is probably the best way to go for most people. Quite a few airlines connect these cities nonstop, and US Airways (at least the former America West part of it) has a very busy hub at Phoenix Sky Harbor (PHX) Airport, so there are cheap flights nearly every hour of the day. You can often get great deals out of any of the 5 major Los Angeles area airports, with prices starting around $60 each way if you buy in advance.

Trains between Los Angeles and Phoenix

There used to be a train that went directly between these two cities, but lately the Amtrak service can only get you close. You can take the train that goes to Chicago and get off in Flagstaff, Arizona, but that takes 10 hours and then you have to take a bus from there to Phoenix, which adds another 3 hours or so. You can also take a train from LA to Maricopa, Arizona, which is a bit south of Phoenix, but from there you’d have to take a taxi as there is no scheduled service into Phoenix.

Long story short, as great as trains are, this route is so complicated and time consuming that it’s just not worth it.

Buses between Los Angeles and Phoenix

Greyhound provides service between several parts of Los Angeles and its main terminal near the airport in Phoenix. If you don’t have a car and your funds are low, this isn’t a terrible method, though there is a cheaper bus from another company. You’ll also be happy to know there are plenty of cheap Phoenix hotel rooms once you get there, as long as you avoid Scottsdale.

Typical fare: $40 online in advance, or $54 in person
Journey time: Around 8 hours each way

GotoBus here is like an equivalent of the Chinatown buses in the Northeast. They go between mostly-Asian neighborhoods in many big cities, with surprisingly low fares.

Driving between Los Angeles and Phoenix

As mentioned at the top, the driving mileage is about 380, depending on exactly where you leave from. The nice part is that it’s straight and easy, and the desert scenery can be quite nice the first time you experience it, unlike the far plainer scenery going from Los Angeles to Las Vegas.

There are no road tolls to worry about, unless you take that one cutoff down in Orange County, which you probably won’t. One highlight will be driving through that area near Palm Springs with thousands of windmills on either side of the road, as seen in the movie Rain Man, and elsewhere.