Getting from Berlin to Munich

Both Berlin and Munich are major travel hubs in Germany, offering plenty of connections to the rest of Europe and the rest of the country. Munich certainly appeals to those looking to experience Oktoberfest, but the city also offers plenty of other things to do. On the other hand, Berlin is known for its history and night life.

The cheapest way and also the slowest way to travel between Berlin and Munich is by bus. Single fares start at €43 but you’ll be traveling for about 9 hours. Trains take less – 6h – but the savings fares start at €69 one way (and depend on when you travel). Flights can be as cheap as €50 one way but you need to add the cost and time of getting to/from the airports and the city centers, too.

Flights from Berlin to Munich 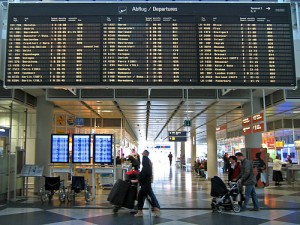 There are two airports serving Berlin and both direct flights to Munich.

Schönefeld (SFX) is the base of low cost carriers serving Berlin and is hub for EasyJet and GermanWings. The airport will be merged into Berlin Brandenburg Airport in early 2013, so plan accordingly. Flights to Munich are operated by GermanWings and take 1h. In mid-September 2012, the single fare starts at €50.

Tegel International Airport (TXL) is the main airport serving Berlin, a hub for Air Berlin, Germania and GermanWings. In early 2013, Tagel is supposed to close and Berlin Brandenburg Airport will take its place. Flights to Munich are operated by Air Berlin and Lufthansa. In mid-September, the single fare starts at €85 on Air Berlin.

Plan in advance (up to 6 months) and you’ll be finding cheaper fares on Air Berlin. Hence, in mid-December 2012, you’ll pay from €60 one way for flight from Tegel.

Buses from Berlin to Munich

The bus is certainly the cheapest option for traveling between the two cities, but it’s the slowest, too. It takes about 9 h to cover the distance. Berlin Linien Bus offers direct buses , departing Berlin daily at 8:15 a.m. The single fare is €43. On the way back catch the bus from Munich at 9:45 a.m. The same fares apply.

Trains from Berlin to Munich

Bahn.de lists the connections between Berlin and Munich. Berlin is served by five train stations, but Hauptbahnhof is the most important , serving the high speed trains and connections to the rest of Europe.

Munich’s main station is located in the city center , west of Marienplatz. Deutsche Bahn uses Munich as a major hub.

There are direct trains, leaving about every hour to two hours from Berlin, but there are also plenty of connecting trains available. The direct trains take 6 h and the single saving fare starts at €69 but depends on the time of departure and how far in advance you make the purchase. The standard fare starts at €121. Both fares are valid on high speed trains.

Driving from Berlin to Munich

You can certainly rent a car and drive the 588 km (shortest route on A9) between Berlin and Munich in about 6 hours (depending on traffic).