Getting from Zagreb to Split 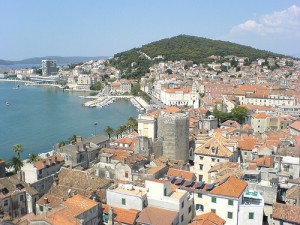 Zagreb is the capital of Croatia is well known for its charming medieval old town and cobblestone streets. The Upper and Lower Towns are worth your time as this is where you’ll find the tourist sights, the restaurants and the bars.

Split is located in Central Dalmatia region of Croatia and was originally built around the Diocletian palace. The old Roman walls, squares and temples can still be visited today. Central Split can be easily explored on foot.

Train travel is not very used in Croatia but there are plenty of bus connections between Zagreb and Split. Bus fares start at around €23* per person, one way. Flying isn’t too expensive either(€41 per person, one way, regardless of when you fly) and if you are in a hurry it might be worth it.

Zagreb International Airport (ZAG), located 17 km from the city center, is the most important airport in Croatia. It is hub for Croatia Airlines and handles only flights within Europe, as well as domestic flights.

Split Airport (SPU) is the second most important airport in Croatia, handling flights to/from Europe, as well as domestic flights. It is located 25 km from the city center , near the city of Trogir.

The flights between Zagreb and Split are operated by Croatia Airlines. The flight time is 45 min. Regardless of when you fly in 2012, expect to pay €41 (308 Croatian Kune) per person one way

Trains from Zagreb to Split

Train travel in Croatia is modern and although there are not very many routes served by trains, those that are offer fast connections. There are direct connection between Zagreb and Split but figuring out the time table and the prices is almost an impossible thing even though the Croatian Railways has an English section on the website (but the name of the stations are in Croatian, of course).

It’s impossible to figure out the price though as the pricing information page is in Croatian only. And on other websites (such as Rail Europe) you can see the timetables but no fare information either.

Buses from Zagreb to Split

Figuring out the buses between Zagreb and Split is actually an easier endeavor. This website , which offers English, lists all the buses to/from Split. A variety of carriers offer connections between the two cities, including: Promet Makaraska, Deni Bus, Croatia Bus. There are connections between the two cities 24/7 , arriving and departing every 15 to 30 minutes during day time and every 1h to 2 h during the night. Prices start at 171 Croatian Kune (about 23 euros) per person one way.

Although the websites do have English listed as possible language to read the site in, don’t get your hopes up.

Driving from Zagreb to Split

You can rent a car in Zagreb and drive the 409 km on A1 to Split. The drive time is about 4 hours. You’ll be drive on a toll road, so take that into attention when planning the budget.

Note:* at the time the article was written