Getting from Split to Zadar 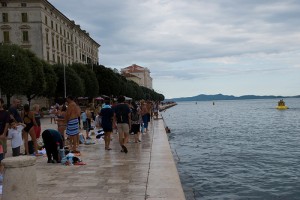 Split is famous for the Roman heritage. Even today, you can still see the old Roman walls, squares and temples.

Zadar is located in northern Dalmatia and also has a Roman heritage. The old town is worth your time and so are the remains of the Roman Forum. During summer, spend some time on the beaches.

Although both cities are served by an airport, the short distance between them (160 km) doesn’t require a flight. You can fly via a connection in Zagreb, though , and the single fare starts at €240.

Generally speaking, buses tend to be cheaper than trains. And in this case, they are also faster.

Buses from Split to Zadar

You can catch a bus between Split and Zadar. There are 22 connections per day and you can find them here . Buses leave by the hour from 5 a.m. until 9:30 p.m. The travel time is about 2h 30 min. Some of the bus companies operating on this route are: Brioni, Autotrans Rijeka and Autotransport. Unfortunately, there is no pricing information available.

Trains from Split to Zadar

Driving from Split to Zadar