Going to the Glastonbury Festival 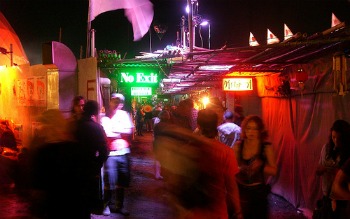 Summer is a time for all kinds of travel, and you don’t really need a specific excuse to take a trip – but if you’re looking for one, planning a trip around a summer festival is an excellent idea.

Many music fans are familiar with some of the best summer outdoor festivals like Lollapalooza and Austin City Limits in the US, but England has been home to the popular Glastonbury Festival since 1970. It’s not only the world’s biggest outdoor music festival, it’s also a combination of music and performing arts in a town that’s famous for being a spiritual destination. In other words, even if you’re not the kind of music aficionado who’d fly across the ocean for a festival, this is a festival that’s more of an event than just a concert.

Glastonbury is located in southwest England, and although the closest airport to the festival site is in Bristol it’s more likely that you’ll fly into London first. You can then choose to hop a short flight to Bristol, but even if you get as far as Bristol by plane you’ll still need to take a train or bus from London out to Glastonbury and the festival site.

There are coaches that run from London Heathrow or Bristol Airport directly to the festival itself, and coaches that connect the festival with other non-airport destinations (including area train stations). Find out all your options for getting to the Glastonbury Festival so you can see which one is best for you.

Going to the Glastonbury Festival in late June can be a great start to a longer trip through southwest England or Wales, or it can just be a long weekend getaway. Either way, it’s a great reason to plan a holiday.