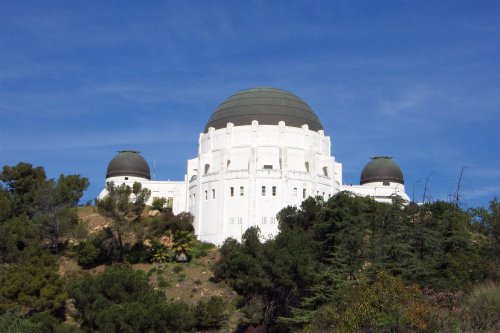 Overlooking the city from the hills of Los Angeles, the recently restored and renovated Griffith Observatory is now a museum sparking curiosity in kids and adults. Built in 1935 as part of the bequest of landowner Griffith J. Griffith, the Observatory is no longer on the cutting edge of research, nor do scientists spend much time peering through the telescopes at distant planets or stars. Now that Los Angeles’ lights have dimmed the stars brightness and commuter smog has made it more difficult to see out of the atmosphere, the best thing to observe from Griffith Observatory, is the city.

Griffith Observatory, on the south side of Griffith Park, overlooks Hollywood and downtown and on a clear day the view extends all the way to Santa Monica and the ocean. To the north, the Hollywood sign stands prominently in view. Griffith Observatory is about as close as you’ll get without driving to the base of the sign.

In 2002 the Observatory closed and underwent a $93 million dollar renovation. Exhibits now provide a look at broad aspects of space science on a universal as well as local level. The “Big Picture,” the largest image of space ever displayed, takes up one entire wall, while each planet in the galaxy has its own booth with facts on that planet and a scale displaying what you would weigh under that planet’s gravity.

There is also a collection of meteorites found in California on display as well as a three-dimensional, detailed, rotating model of the moon.

More than a museum, Griffith Observatory has become a landmark and symbol of the past for Los Angeles. James Dean appears in front of the Observatory in several scenes of “Rebel Without a Cause,” and a bust of the actor was placed outside of the museum. The museum is still a popular filming location.

Since the reopening of the Observatory, visitors have had to make reservations for a shuttle to take them up to the main area. That requirement ended November 2, and you can now drive up to the main parking lot and tour the building for free. Enter on Vermont Avenue and follow the signs after passing the Greek Theater. Tours of the exhibits take about two hours, more if you want to see shows in the Planetarium or Event Horizon Theater. Tickets to both of those theaters are an extra charge.