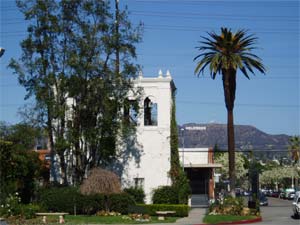 Squeezed against the back lot of Paramount Studios, with a full view of the Hollywood sign, is the home of many Hollywood greats, the Hollywood Forever Cemetery. It is a quiet place to contemplate the allure of Hollywood and the ephemeral nature of celebrity.

Cecil B. De Mille and his wife lie within sight of the Paramount water tower. Tyrone Power, Benny Goodman, Marion Davis and Valentino are all present. Mel Blanc rests right near the cemetery entrance. His stone is covered with small rocks (each signifying a visit to the grave) and two tiny pictures of Bugs Bunny. Further in, an obelisk marks the grave of Griffith J. Griffith, donor of Griffith Park. He is equally well known for shooting his wife while in an alcoholic rage. An early movie director, William Tanner, is also here. He was murdered. On discovering the body, his butler called the movie studio before dialing the police. Tanner’s murder is still unsolved.

People not buried here also have representation. A pink marble stone and a color photo commemorate Jayne Mansfield. Although she is buried in Pennsylvania her fans wanted her represented in Hollywood. Another non-resident, Hattie McDaniel, the first African American actress to win an Academy Award, has a pink marble column. When she died, the cemetery owner Jules Roth refused to permit her to be buried here. In 1999 the current owner, Tyler Cassidy, asked if her family would like her to be moved to Hollywood. They declined, but permitted him to place a memorial. Her column has a view of the pond and of Fairbanks Lawn, resting place of Douglas Fairbanks, Senior. “This being Hollywood, it’s all about real estate”, said Karie Bible, civil war buff, film historian and tour guide at Hollywood Forever.

Not everybody owns real property. Some share air space in the marble mausoleum. Peter Finch, Lon Chaney, Peter Loree and Jane Powell for example. And Valentino is here, buried in a borrowed vault. “He thought Italy was too small for him” said Karie.

Every August 23rd, the anniversary of Valentino’s death, a mysterious “Lady in Black” brought a red rose to his grave. Karie took up the tradition, became that Lady and added a modern touch. Besides bringing the rose, Karie gives a talk on the women in Valentino’s life and screens one of his films. Even though Valentino died in 1926 his memorial service recently drew about 200 people.

The cemetery’s own history reads like a script for a film noir. Jules Roth, the owner for 49 years, was charming, philandering and larcenous. During his tenure the cemetery was busy at night. Rave parties were not unusual. Graves were vandalized and the cemetery made more money on people moving out (disinterment) than moving in (interments). In 1998 the State of California nearly shut the cemetery. The same year, Tyler Cassidy bought what he called the “gorgeous romantic ruin” for $375,000. Imagine, 62 acres in the heart of Hollywood. Cassidy has upgraded the property, and it is again a respectable burial site.

Visitors can buy a self-guiding map in the flower shop. But Karie Bible’s two-hour tour is much livelier than wandering alone. She has lots of tales to tell. And on spring and summer weekend evenings hundreds of picnickers fill the cemetery for the film screenings on the wall of the mausoleum. Watch a movie. Wander around. Think about fame. Hollywood Forever is worth a visit.

Joanne Steuer is an eastern transplant living in Los Angeles. She blogs about travel on WordPress as Travelwithmenow. She also writes about psychology.