Krka National Park is a natural botanical wonderland in Croatia with a multitude of different species of plants and animals. The park covers over 109 square kilometers mostly around the Krka River. Krka park is known for the cascading waterfalls along the plunging river and the sights bring many to the park from around the country.

Although not as dramatic as Plitvice lakes, the waterfalls are dynamic and the scenery is largely untouched except for hiking trails and the occasional access point to the river. Unlike Plitvice, visitors are allowed to swim in the pools at Krka national park in addition to hiking up and down the length of the river.

Krka river comes out of the ground at what is called a karst spring which emanates from the ground after flowing through an underground system of caves or collected from the rainwater or snow melt in other basins. Although the water of Krka is untouched, karst springs, because they fluctuate so much with the seasons, have notoriously low water quality and you should probably not drink out of the river.

Krka park is more convenient to Split and other big cities than Plitvice and if you are in the area and have limited time you can get the idea of what Plitvice is like without devoting a few days to traveling up there. If you have the option of seeing Plitvice though, it far surpasses what Krka park has to offer.

From Split, drive northwest along the coast on the E65 highway then head north on 33 and west on 56 after passing the A1 highway (which can also be taken from Split). Follow signs from there to Krka and be prepared to pay about 10 euros as an entry fee. 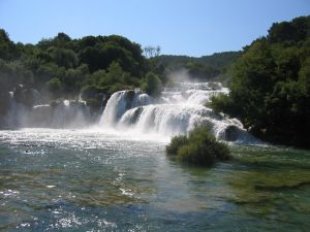