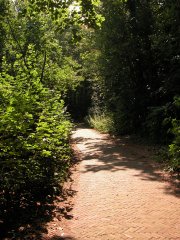 If you believe the legends, Mljet Park is a magical, mystical land of enchanted coves and wondrous legends. It is supposedly Odysseus’s vacation destination of choice on his travels back to Greece and it is also mentioned by Benedictine monks and St. Paul—the travel agents of antiquity—as a spot to see when traveling through the Mediterranean.

Mljet Park has naturally occuring salt lakes in the center of the island that have been a tourist draw for centuries. It is likely that receding ocean levels deposited the salt water in the depressions of both the bigger “Great Lake” (Valiko Jezero) and littler “Small Lake” (Malo Jezero) and with a lack of incoming fresh water, they have never desalinated.

St Mary Island is located on the far side of the Great Lake and holds a Benedictine Monastary from the 12th century. Transport to the island is included with your admission to the park, or you can rent a boat and row under your own power to the island.

Mljet also has what is known as karstic geology, meaning there arre many caves, tunnels, and depressions around the landscape of the park. Although it is not common to see serious cave divers exploring the caves, they are a fun introduction to the sport for kids and adults with active imaginations.

Historical sources make note of the abundance of coves and the twisting coast line that obscures visitors from view as they walk along the beach. The white sand and shallow, solar heated tide-less waters also deserve mention.

Mljet park bills itself as the first natural ecosystem in Croatia that was billed for protection. Mljet became a National Park in 1960 and the coast and abundant forests have been untouched and undeveloped ever since. A small community of people live on the island in the same villages that were settled by Illyrian tribes and the Roman Empire and try to live without impacting the ecological balance of the island.

The best way to get to Mljet is to fly into Dubrovnik, then take a cab or bus to the ferry terminal in Gruz, a section of Dubrovnik’s city area. The Gruz ferry lands in Sobra on Mljet. Ferries take about 2.5 hours from Dubrovnik and the faster catamarans take about 90 minutes.

There is only one hotel in Mljet Park. Hotel Odisej has mixed reviews and several complaints about the price, but most patrons seem generally satisfied. The hotel occupies the middle ground between luxury and budget hotels and is moving toward a higher income clientele. For cheaper accommodations, a number of rooms in local houses are available for rent for independent travelers.