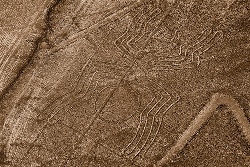 Nazca lines remain one of the world’s biggest mysteries. Theories about their purpose range from giant calendar to extraterrestrial landing strip. Lately it’s been discussed that they line are part of a water fertility cult. The lines are now a UNESCO World Heritage Site and one of the most popular travel destinations in Peru.

On a high arid plateau stretching between Nazca and Palpa, spread over 500 sq km/193 sq miles, there are eight hundred straight lines, forming spectacular drawings of animals and plants (see the Spider in the photo).

Nazca is located at about 272 miles/440 km southeast of Lima.

>>book a cheap flight to Lima

The lines are thought to have been created by three different groups:

The lines were discovered by the American scientist Paul Kosok in 1939 and have dazzled scholars ever since. Maria Reiche, a German mathematician, studied the lines for decades. She developed the theory according to which the lines were drawn to please the gods.

Please note that it’s prohibited to visit the lines on foot. They are almost imperceptible at ground level anyway. To view the lines you need to be up in the air. Several travel operators organize flights (lasting 30 minutes) which depart from Nazca’s airstrip in the morning and early afternoon. You can easily book a flight on the spot as there are many charter airlines offering such services.

A full day excursion in Nazca (departing from Lima), including a flight over the lines can cost up to US$250 per person.

If you don’t fancy paying to view the lines, you can catch a glimpse at the lizards, hands and several other figures, from a viewing platform located on the side of the Pan American highway.