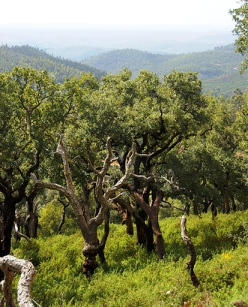 Portugal is one of the world’s major cork growers; as much as one third of the total cork oak area is in Portugal, which accounts for about half of the cork harvested annually in the world.

The cork oak loves the western Mediterranean climate, which means the Algarve is the region where the best quality cork is obtained. Cork oak also grows in Alentejo.

Cork is a light, flexible, elastic material, impervious to moisture, to liquid and gaseous substances. Its qualities led to the industrial utilization of the material. With the invention of glass bottles, cork became important for the stopper industry.

Portuguese cork production is directed at big consumer markets such as USA, UK, Germany. The industry represents 16% of the total foreign income derived from trade.

Opened in 1999, it’s currently one of the most visited museums in the Algarve region. Unfortunately the official website is only in Portuguese, making it a hassle to figure out entrance fees and opening hours.

It is possible to tour cork factories. However, it’s quite impossible to book a tour independently. There are companies which organize such tours for groups and most often cork factory tours are combined with a visit to the museum and/or wine tasting.