Support Portugal at the World Cup 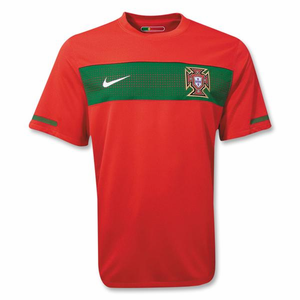 It’s almost time. The world’s biggest sporting event, the 2010 World Cup, is almost upon us, and it’s time to throw your support behind the boys in red and green, the Portugal national team. Here’s a simple guide to following and supporting the team during June (and hopefully July).

Know the Players:
Portugal has a strong team all around, but by far the biggest star on the side is Cristiano Ronaldo. When Ronaldo plays well, and scores goals, Portugal does well. When he is out of form or injured, as he was during World Cup qualification, things tend to get a lot harder for the team. With defenders like Pepe, Ferreira, Carvalho and Bruno Alves, they shouldn’t allow in too many chances, but Portugal lacks a world-class goalkeeper, and that could be a major problem.
>> Check out the entire Portugal World Cup roster.

Get the gear:
Portugal has brand new home and away jerseys for this World Cup, and there’s no better way to show your support for the team than to get your kit and wear it on match days. The Portugal home kit is red with a green stripe across the chest, and the Portugal away shirt is white with both green and red stripes down the middle. Whether you’re at the match, at the pub, or at home, true supporters will be wearing the kit when the team takes the pitch.

Know your enemies:
Portugal is drawn into World Cup Group G, probably the most difficult of the eight groups. North Korea shouldn’t be a major threat, but 5-time World Cup champions Brazil are ready to make another long run in the tournament, and Ivory Coast are looking to grab the glory on African soil, powered by the Premier League scoring champion, Didier Drogba.