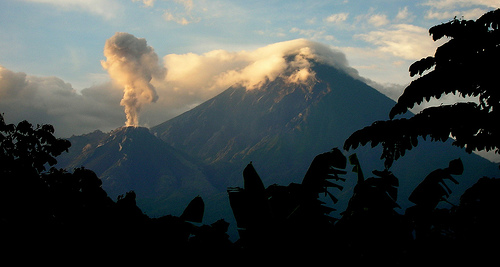 Volcanoes are among the most interesting and feared natural wonders in the world. While their lava shows and raw power are what makes them so beautiful and intriguing, they are also what make volcanoes so dangerous. Lava flows can destroy entire towns and ash eruptions can kill people and livestock, damage homes, and affect an area’s climate for year’s to come…not mention grounding planes.  Still, when given the chance to get up close to an erupting volcano, most of us take it.

In Guatemala, the Santa Maria volcano stands at 3,772 meters. Eruptions have been happening here for 30,000 years. In 1902 a strong eruption formed a crater on the side of the volcano and caused extensive damage in the region.  Today it’s one of the world’s most active volcanoes; the nearby town of  El Palmar, has been destroyed twice by lahars, volcanic mudflows that slide down the mountain and harden to a concrete solid when they stop. Despite the danger the volcano presents, intrepid travelers can hike around the area as part of a guided tour.

Interested in getting up close to Santa Maria? Buy an air ticket to Guatemala, look for budget accommodation in Guatemala, and then pray the volcano stays quite for your visit.