Things to Do in Lisbon 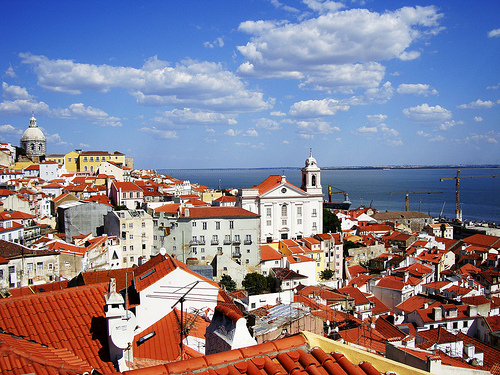 The capital and largest city in Portugal, Lisbon offers plenty to see and do and more then enough activity to fill three to four days (more if you take some day trips). Here are a few ideas for things to do in Lisbon.

Wander down (rather than up) through the narrow streets of the Alfama district, the oldest district of Lisbon. The area starts at  the Castle of São Jorge before tumbling its way down the hill to the Tejo river. At night, the district is a great place to eat, drink or attend a Fado show.

The Baixa district is the city’s downtown area, which was rebuilt after the 1755 earthquake. Wide avenues lined with shops, cafes and restaurants lead to the Rua Augusta Arch and beyond it, the grand Praça do Comércio and the Tagus River. From the Baixa, take a ride up the vertical Elevador de Santa Justa to the Bairro Alto, the central district of Lisbon. Filled with trendy restaurants, designer shops and sleek bars, The Barrio Alto is the place to go for nightlife in Lisbon.

Take in the view

The hilltop fortification of Castelo de São Jorge is one of Lisbon’s “must see” historical attractions, but it also provides one of the best views of the city. For another perspective, ride the wrought-iron Elevador de Santa Justa, which was designed by Gustave Eiffel’s apprentice and offers sweeping views over the city’s skyline.

Aside from the Castelo de São Jorge, Lisbon is home to several other museums and monuments worth exploring. There’s the Oceanário,  Europe’s second-largest aquarium, the Lisbon Botanical Garden, the Museu da Electricidade (Electricity Museum), and the Museu Calouste Gulbenkian, which houses Egyptian, Middle Eastern and Asian artifacts, along with art from masters like Monet, Manet, and Degas.

Lisbon’s iconic yellow tourist trams are one of the best ways to see the city. Climb aboard Tram 28 and you’ll climb up and down Lisbon’s hills, twisting and turning down the cobbled streets past some of the city’s best sights, past the Castelo de São Jorge and the Alfama district, the Chiado district, and the Estrela Garden.

The Belem district is one of the most historically important in Lisbon. Six kilometers west of the city center, it’s home to a number of museums and monuments, including the Coach Museum , the Monument to the Discoveries, the Belém Tower, and the heavenly pastéis de Belém custard tart.

>> more on things to do in Belem

Sintra makes an excellent day trip from Lisbon.  About 30minutes away from the city by train, you’ll find the beautiful hilltop Palácio Nacional da Pena, an eclectic architectural mix of Neo-Gothic, Neo-Renaissance and Moorish design in pastel pink and yellow. The walled Castelo dos Mouros, the Sintra-Cascais Natural Park, and the Palácio Nacional de Sintra round out the area’s attractions.