Things to Know Before You Book a Hostel in Los Angeles 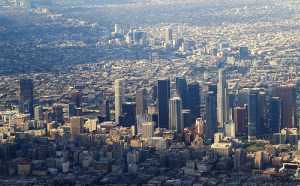 It’s understandable that the first thing most people think of when they’re planning a trip to Los Angeles isn’t what hostel they’re going to stay in. This is the city where the streets are paved with gold, right? And where you’ll bump into movie stars everywhere you go, right? And where there are Hollywood agents on every street corner just waiting to give you, the latest unknown potential celebrity, a starring role in a movie, right? Hostel? Screw a hostel, gimme the keys to the Ritz!

But of course you’ll wake up from that daydream soon enough, and then you’ll realize that not only won’t you turn into a celebrity overnight, you’ll also need an affordable place to stay in this notoriously expensive city. Which is, as you’ve probably guessed, where the hostels come in.

The next challenge (especially for those of us who don’t know L.A. very well) is to figure out which hostel to choose. There are enough options, but also enough differences that it can be hard to know what you’re getting into. So to help you begin your hostel search with a little more information, here’s a list of important things to know about hostels in Los Angeles before you go.

1. Get familiar with that famous L.A. sprawl

We’ve all heard about it – how unbelievably enormous Los Angeles is, and how it just seems to keep going in all directions. There are all sorts of issues that go with that kind of sprawl, including environmental concerns (because essentially everyone needs a car to get anywhere) and community concerns (because it’s harder to develop a sense of community when everything’s so spread out), but those things don’t really impact tourists. How, then, is it important for you to get a handle on L.A.’s sprawl?

It’s important for a couple reasons, first and foremost because not everything that says it’s in Los Angeles is actually going to be in the city proper. There are countless suburbs that make up the L.A. metro area, and while you may decide one of those ‘burbs is where you want to stay, it’s the kind of thing you’ll want to know in advance.

The other big reason why learning about the sprawl in L.A. is a good idea has to do with your sightseeing “to-do” list. With just a cursory look at a map of Los Angeles, you should be able to plot out exactly where the attractions on your list are in the city. It’s unlikely that they’ll all be in one concentrated area, but if you find that most of them are (or at least the ones that are higher on your priority list), you’ll want to concentrate your search for L.A. hostels in that area to make your sightseeing tasks easier.

This one is kind of related to the first one, but enough of its own thing that I’m giving it its own number (so there). While you’ve got that map of Los Angeles out, cross-reference it with some of the addresses on the hostels you’re looking at. It doesn’t matter if a hostel turns up under a search for “hostels in Los Angeles,” it may very well be in a completely different city.

Now, you may want to stay in a completely different city – who, for instance, wouldn’t be tempted to stay right on Venice Beach instead of congested L.A.? I’m not saying that if a hostel’s address doesn’t include the words “Los” and “Angeles” in its address that you shouldn’t consider it – only that you should know that kind of thing before you put your money on the table.

3. You got there just fine, now for the getting around part…

Yes, this is sort of another sub-topic of item #1. (Which just emphasizes how important #1 is, no?) Here’s the thing – you might expect a city the size of Los Angeles to have a top-notch public transportation system that’ll have you from one end of the I’ve-already-told-you-how-big-it-is city to the other in no time, so that you, a visitor with no desire to rent a car or negotiate L.A. traffic, won’t have to do any of the driving yourself.

Sadly, L.A. isn’t that city. Sure, there’s a public transit system, and sure, plenty of people use it every day. But it’s neither particularly convenient (especially for visitors) nor terribly speedy. So even if you think you’re doing yourself a favor by finding a hostel that advertises how close they are to a bus stop, that may end up being more of a curse than a blessing.

The good news is that many hostels in L.A. know this about their city, so there are actually quite a few hostels that offer shuttle services to and from some of the more popular tourist destinations in the area. This is a life-saver for travelers who don’t want to rent a car, aren’t old enough to rent a car, or can’t afford to rent a car. So if you fall into any of those groups, be sure to check on the shuttle options at the hostels you’re looking at.

Unfortunately, the going rate for a hostel bed in L.A. is more than most veteran hostel-goers are used to spending, especially if your travels have taken you to Europe, South America, Asia… Well, pretty much anywhere outside the United States. (Heck, even in the U.S.) Prices like $40-45 per bed per night are not only not unheard of, they’re the average.

Obviously, you’ll have to work that into your budget before you even leave home, and this will certainly give you more incentive to find out whether the hostels you’re looking at have free perks (like WiFi, breakfast, shuttle service, etc.) – but even beyond that, knowing that the prices in L.A. are higher than you might ordinarily expect will make it so you don’t dismiss a place out of hand because you think they’re charging too much, when they’re really just charging what everyone else is charging.

And in the end, you might take the higher prices on L.A. hostels to be a sign that you might as well opt for a budget hotel instead. If you’ve been traveling for awhile and haven’t had a private room in months, or you’re going to L.A. with friends and can share the expense of a 2-star hotel room, then that’s definitely an option to consider. (Of course, you’ll want to keep in mind that most hotels don’t offer shuttle services to their guests – especially the cheap hotels – so the hostel route might still be your best bet.)

Alright, that might be an overstatement. But it’s true that knowing the things listed above can really help someone who doesn’t know the L.A. area plan their trip better and find a hostel that’ll suit their travel needs and budget. Now go have fun in Los Angeles, kids, and bring me back a pair of mouse ears, won’t you?