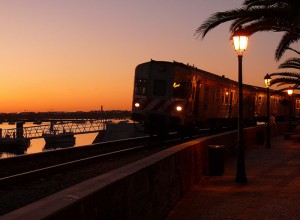 Just like bus travel , train travel in Portugal takes time. Only several lines are high-speed or fast, the rest of the rail network is formed by normal lines. Although between the cities it’s usually easy and fast to travel by train, on some regional routes it can become painfully slow.

The country is well connected to the rest of Europe. There are direct trains from Spain, France and UK. Thanks to the European rail network you can get from any major city in Europe to Portugal by train (making stops along the way, of course).

Generally, station facilities are below the European average and there are often long queues at the ticket counters. So either go to the station early or make a reservation ahead of time (20 days in advance for the Alfa and InterCtiy trains).

Train tickets in Portugal are affordable so you really don’t need a pass to travel within Portugal. However, InterRail, Eurorail, Eurodomino and Eurail passes are valid on Portuguese trains.

There are also scenic train journeys, run by the same State owned companies. Their website mentions them, along with the possibility to book adventure and other type of journeys offered. The northern region is definitely worth your time, as the scenic train ride passes through places where there are no roads.