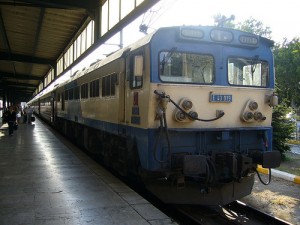 Buses in Turkey are a cheap way to get around. And they are usually faster than trains. But do you really want to be stuck in a bus for 12 hours, without being able to move at all? The alternative is the inexpensive, civilized, air conditioned, but , sometimes, slower train. You can also choose a sleeper for over night travel and there are restaurant cars for your meals. Plus, you have quite a bit of space to move around.

How to get to Turkey by train

There are direct connections from Romania and Bulgaria on the Balkan Express. You can also get to Turkey by train from Greece on the Filia-Dostluk Express and from Iran on the Trans-Asya Ekspresi. There are also daily connections to Budapest (Hungary) via Bucharest (Romania).

The best trains in Turkey are now modern and are excellent choices for long distance travel. However, it is true that the rail network is limited, so you’ll have to use the bus where you cannot take the train and for the short distances.

There is a high speed service between Istanbul and Ankara, which drastically reduces the travel time (by 2013 it’s expected to take this journey in just 3 hours, beating both the plane and the bus). Istanbul is also connected to Izmir, Bursa, Bodrum, Eastern Turkey and cities in Cappadocia; while Ankara is also connected to Izmir, Adana, Konya and Eastern Turkey. There are no train services to Antalya, Marmaris, and Alanya, so to get to these cities you need to combine train and bus travel.

How to get tickets online

The TCDD website https://www.tcdd.gov.tr/ offers the possibility to book the tickets online , but you’ll need to create a user/password before you actually book the ticket. Remember to print out the reservation.

Alternatively, you can get the tickets directly from the train station. If you travel during the high season, chances are that the sleepers are already full; but otherwise you should be able to book a seat several days before departure.

Rail Europe doesn’t offer point-to-point tickets for Turkey, but you can get a Balkans Pass which also offers the possibility to travel in Greece, Bulgaria, Macedonia, and Romania.

On the other hand, InterRail has the Turkey Pass which allows for travel on all trains operated by TCDD.