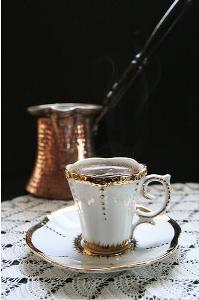 What’s so special about Turkish coffee?

This magnificent coffee is made from Arabica blend, really finely grinded. To add a bit of spice to it, while the coffee is being ground, cardamom is added to the coffee beans.

There are six levels of sweetness, ranging from black to very sweet. Sade is the plain Turkish coffee, with no sugar but it’s fairly bitter. If you choose to drink a sweet Turkish coffee, sugar is added to the coffee while it’s prepared. As the coffee is being prepared in an ibrik -narrow-topped small boiling pot-, it begins to foam.

Turkish coffee is served hot in a fincan. After the guest drinks it, the custom is to turn the cup upside down, allow it to cool and then the hostess will tell the guest’s fortune reading from the remaining grounds in the cup.

Where to drink Turkish coffee?

Every city in Turkey is filled with coffee houses. But if you expect something from the Arabian nights you will be disappointed. Today’s coffee houses have TVs, card games and backgammon.

How to make your own Turkish coffee

In order to prepare the Turkish coffee, start by adding to the ibrik 1 table spoon of powder coffee and 1 table spoon of sugar (traditional method) for every fincan. Add an extra ounce of water to the mixture. The ingredients should fit just below the ibrik’s neck.

Wait about a minute for the ground to settle. Then you can start sipping but be careful not to taste the “mud” (the grounds).