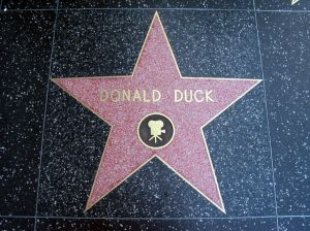 The Hollywood Walk of Fame stretches 3.5 miles around Hollywood Boulevard and Vine streets in downtown Hollywood and presents more than 2,000 names who have achieved fame and prominence in one of the five entertainment categories.

Created as part of a Hollywood “Face Lift” in 1958, the Hollywood Walk of fame is another way to walk the streets “seeing stars” in Hollywood. The Walk also connects the community with the entertainment industry in Los Angeles. People tromp up and down the street, literally staring at the ground and reading names as they go.

Nominations are due every May and the committee then meets to award stars to chosen every year in June in five categories. The categories are: film, television, the recording industry, broadcasting, and live theater. Recently, the selection committee has been accepting nominations for corporations and businesses on the Walk of Fame, so long as the company is active in Hollywood and at least 50 years old. Disneyland was the first recipient and now The Los Angeles Times and the KTLA TV station each has their own star.

The Walk of fame ends with stars for The Beatles and Elvis Presley.

There are two stars for Harrison Ford, for two different actors of the same name.

Gene Autry is the only person to have a star awarded to him in each of the five categories.

The Walk of Fame became a cultural landmark in Hollywood in 1978.

The first star on the walk was awarded on February 9, 1960, to Joanne Woodward